12 Epic Hotels That Take Glamping to the Next Level 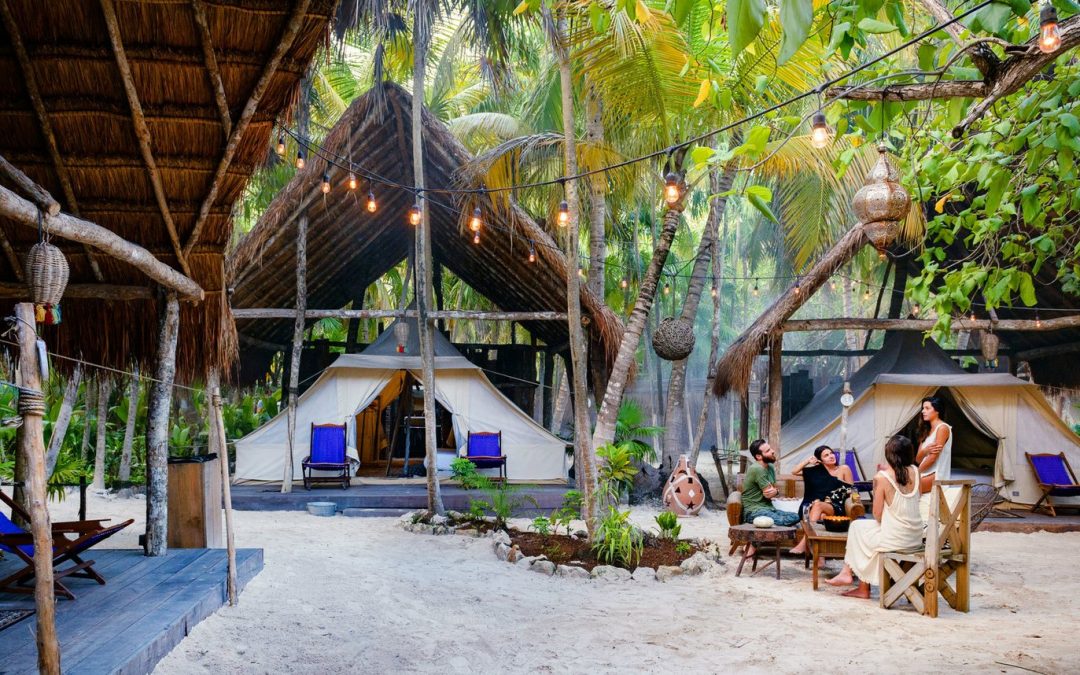 Have you ever wanted to go on a camping trip but (a) you have no gear, and (b) you’d have no idea what to do with it even if you did? It’s a dilemma faced by many urbanites. The idea of camping sounds utterly magical: beans for dinner, drinking from tin cups, real fire! But where does one begin? And what about wolves? And rain? Will there be bugs?

Despite those valid concerns, the call of the wild remains a powerful one. After all, what are we worth if we can’t manage our own basic survival in the natural world? The hotels below are a good first step toward sharpening your outdoor skills. They provide a camping experience that will immerse you in the unpredictability of nature—to a point. Your stay will probably feel more like a Patagonia ad than a Bear Grylls expedition, but we won’t judge you if you want to tell the city slickers back home that you were attacked by two, nay, three venomous snakes. And you slayed them all! With your bare hands!

Four miles downriver from the much-lauded Dunton Hot Springs resort, this summer-only retreat is made up of eight freestanding tents—four at river’s edge, perfect for fishing, and four more up the hill, surrounded by aspen trees. Each comes with a private porch, king bed, and en-suite bathroom complete with six-foot soaking tub and shower, and they’re heated by gas stoves. Guests also have access to all manner of mountain sports in Dunton’s 1,600 acres of awe-inspiring wilderness.

Staying at Aman-i-Khás means staying in Rajasthan’s Ranthambore National Park, surrounded by acres of wilderness and wildlife, including one of India’s top tiger reserves. The hotel is little more than an encampment of tents, each one heated and air conditioned, but minimally decorated in a combination Mughal/British colonial style, with simple, spare furnishings. As much as it can be, this is a modest form of luxury— the local wildlife is the main attraction.

Located right on a white-sand beach, Nomade Tulum is a rustic-chic enclave that brands itself as a temporary habitat for, well, nomads. And what true nomad wouldn’t feel at home in a deluxe tent, especially one that’s been designed with the natural elements of the surrounding jungle and pitched only steps away from the Caribbean? Those with a wandering spirit will also enjoy the sense of community here, with workshops and retreats designed to “awaken the soul, shake the body, and free the mind.”

At the edge of South Africa’s famed Kruger National Park is the private Manyeleti Game Reserve—nearly 100 square miles of wild bush, populated by all manner of game. The land is owned and managed by the Mnisi tribe, who’ve opened it up to a select few visitors: guests of the Honeyguide Tented Safari Camps. For the full safari experience, stay in the Mantobeni Camp, where the retro-romantic tents will give you a proper dose of what the hotel calls “Hemingway’s Africa.”

Kasbah Tamadot is owned by no less adventurous a pioneer than Richard Branson himself. The majestic estate has a main hotel, the former home of Luciano Tempo, renowned antiques dealer and interior designer, and ten luxurious Berber Tents. Six of the tents have their own jacuzzi, and each has a private deck with ample space for romantic outdoor dining. This is definitely not roughing it, but if it’s good enough for a brave outdoorsman like Sir Richard, it’s good enough for us.

Resort at Paws Up

The Resort at Paws Up is for the traveler who wants their wilderness escape to include all the comforts of civilization. You’ll be out in the elements, for sure, but in the most luxurious manner imaginable. The tents here feature just about every comfort you could want, from hardwood floors, en suite bath, air conditioning and heat, to internet, cell service, and a camping butler. If you’re looking to combine mountain-West ruggedness with white-glove service, this is the place to do it.

The name Longitude 131° refers to the precise east-west location of Uluru, the iconic rust-colored rock formation that stands just outside the hotel’s sixteen tent-like cabins. Elevated on stilts above the fragile bush, the units feature full-length windows with uninterrupted views of the thousand-foot-high monolith, and each is themed after a different Australian explorer. Inside, framed artifacts and memorabilia from those pioneers are smartly contrasted with local indigenous artworks.

Normally, we’re wary of beige. But when it refers to the organic sailcloth with which eight tented guest rooms are covered, it’s anything but dull. The Beige of Siem Reap is luxury camping—virtually in the shadow of Angkor Thom, the ancient capital of the Khmer Kingdom—that sets out to provide guests a connection to Cambodia’s past. The tents are in harmony with their hallowed surrounds, and are furnished with antiques that aim to evoke the French cultural influence throughout the country’s history.

Galápagos Safari Camp brings the tented luxury camps familiar across southern Africa to one of the most magical settings in the Americas. You’d probably be content to lie in the hammock on your tent’s private balcony, soaking in the camp’s hillside views, but you came too far to stay out of the wilderness. Most guests prefer to express their inner Darwin, and for them a wide array of programs and excursions are available on land, at sea, in the surrounding islands, or even underwater.

Take one last look at the crowds and development in Bali as you pass through, boarding a Cessna Caravan seaplane at Denpasar airport for the hour-long flight to Amanwana. The resort is located on the nature reserve of Moyo Island, and once you’re out here, there’s no sign of human habitation, apart from 20 identical luxury tents. Some are closer to the beach, others closer to the jungle, and all are lavishly furnished with king beds, writing desks, sitting rooms and sprawling, decadent bathrooms.

Set on a hundred-acre estate in the medieval city of Jaisalmer, a desert way station that’s been welcoming traders and travelers for the better part of a millennium, the Serai’s airy tented suites start out lavish and only get better from there. They lay the splendor on thick here to balance the harsh Rajasthan landscape: walled gardens with sunken pools counteract the arid winds nicely, and at nightfall, lamps and carpets summon a Sultanish grandeur to complement exquisitely prepared local delicacies.

We’ve talked an awful lot about El Cosmico, and with good reason—this is one of our favorite hotels in the world. Much of our love stems from the variety of lodgings they offer. In addition to the vintage Airstream trailers they’re known for, there are tepees, yurts, and safari tents. They’re sparsely furnished, but what decoration there is is impeccably curated, exceedingly cozy, and oozing with character—which more than makes up for the fact that the bathrooms are not attached.

This article was written by Mark Fedeli and appeared as “Call of the Wild”  on Tablet Hotels.