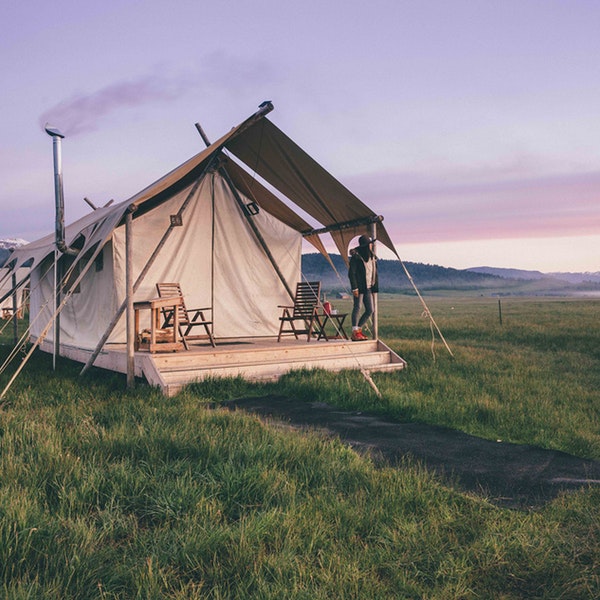 Our national parks protect some of the highest peaks, oldest rocks, and most otherworldly terrain in the United States. It’s no wonder they’re so beloved. Camping in one of these glorious spaces allows you instant access to the natural wonders and abundant wildlife that make each worth visiting—but their popularity also means they’re often crowded. If you want a stay that’s extra luxurious—and luxuriously crowd free—book one of the following glamping sites set near national parks, which will elevate your time in the great outdoors while putting you right at nature’s doorstep.

With eight locations and four new camps set to open in California destinations in 2020, Under Canvas has mastered safari-inspired accommodations in the United States, and all of its sites are set within 30 miles of a national park. The company’s various tent types feature en suite bathrooms and sleep between three and seven people in king-sized beds. Each campsite offers activities specific to the area, such as hot-air balloon rides over Moab, llama treks in Glacier National Park, private yoga classes in Zion, or white-water rafting trips in the Smokies.

With the TENt Pass, you can spend 10 nights per year in any Under Canvas location, either split between several sites or all in one location. Check the Under Canvas website in September when yearlong passes for the 2020 season are set to go on sale. —From $99 per night The Resort at Paws Up
Near: Glacier National Park (Montana)

Dive into Montana’s natural wonders at The Resort at Paws Up, which offers a variety of accommodations (including a lodge and home rentals) and is situated about two-and-a-half hours away from Glacier National Park. For glampers, six luxury campsites—each with six tents—are thoughtfully placed in secluded areas of the property such as on the banks of the Blackfoot River and near the serene Elk Creek. Tents range in maximum capacity from two to six people. From mid-May through mid-October, relish the heated slate bathroom floors, spacious showers, and rustic-refined decor of the well-appointed tents. Each camp comes with a chef, who serves up elegant, family-style ranch cuisine, and a butler, who helps set up your day-to-day itinerary and can show you how to build the perfect s’more. —From $1,250 for two nights No two of Collective Retreats’ luxury tents are furnished the same; the company, which has five locations across the country, strives to connect travelers to the natural surroundings of each destination through carefully curated designs. The plush Summit Tents—the company’s most elevated option—sleep up to three people and are kept cozy with a king bed or two singles, as well as a private, en suite bathroom. The smaller Journey Tents, which sleep two, come with a queen or two singles and a shared bathroom. All tents are equipped with electricity, environmentally friendly bath products, Turkish towels, and a wood-burning stove. Opt for the farm-to-table dinner; the rotating menu includes such dishes as braised elk meatballs, cast-iron walleye filet, and summer berries with whipped cream for dessert.

The Yellowstone location is less than an hour’s drive from the edge of the park, and the Vail site is less than two hours from Rocky Mountain National Park, with a number of national monuments and forests in between. (Collective Retreats also has locations in Texas and New York, though they’re not near national parks.) Weekend and holiday bookings may require a two- or three-night minimum stay. —From $125 per night Escape to the Wild West in style with handcrafted Conestoga wagons, inspired by their 19th-century predecessors, which were used to transport goods between cities and rural communities. Capitol Reef Resort in Torrey, Utah, provides eccentric luxury accommodations mere miles from the national park. The stationary wagons—which are air-conditioned and situated along Scenic Byway 12—sleep up to six with a king bed and two sets of twin bunk beds. Soak up picturesque red-rock views from the seasonal outdoor heated pool or year-round hot tub. Or book an à la carte adventure with the resort through the national park, such as a llama day hike or four-wheel jeep tour.

(Tip: You can also find Conestoga wagons near Yosemite National Park at Yosemite Pines RV Resort and Family Lodging.) —From $249 per night

Photo by Kristin Clements/Acadia Yurts
Acadia Yurts is located on the west side of Mount Desert Island, which locals call the “quiet side” of the island.

Acadia Yurts, located on Maine’s Mount Desert Island and accessible by car or ferry, amps up the luxury of its 24- and 30-foot-wide dwellings, which sleep a maximum of four or six people, respectively. Just miles from Acadia National Park, the yurts feature standard lattice walls, skylights, and colorful, whimsical decor. A full bathroom and kitchen setup take them from traditional to top-notch. The new on-site wellness center boasts a sensory deprivation float tank, sauna, and yoga studio; guests can also book massage therapy with CBD and Himalayan hot stone treatments. —From $185 per night, three-night minimum in April, May, and October; from $1,150 per week June-September

Raw Alaskan wilderness is literally outside your front door at Alpenglow Luxury Camping. Located about two-and-a-half hours from Wrangell–St. Elias National Park and four hours from Denali National Park, Alpenglow’s 12-by-14-foot canvas tents sleep up to three people and feature covered porches with views of the Matanuska Glacier and surrounding valley. Out here, things are a little more rugged. There is no electricity in the tents, but you can recharge your phone or portable lantern batteries in the common space. The site opens Memorial Day weekend each year and typically closes the first weekend of September. Summer temperatures hover around 60 to 80 degrees during the day and 50 to 60 degrees at night, and although the tents aren’t heated, there are plenty of extra blankets in each. There is no shower on the property, but Alpenglow provides a bucket of hot water and sponges to rinse off before taking a dip in the site’s cedar hot tub, which offers mountain views. —From $132 per night Photo by Aaron Leitz/AutoCamp
Just outside its namesake park, AutoCamp Yosemite has easy access to the great outdoors.

Located in Midpines, California, on the outskirts of Yosemite National Park, AutoCamp transformed a fleet of sleek, modern Airstream trailers–86 to be exact–into chic accommodations kitted out with Tempur-Pedic mattresses, spa-inspired bathrooms, and private patios with fire pits. Each sleeps up to three people. Cabin-style suites and luxury tents are also available and offer a bit more space. Explore the thick brush, winding waterways, and scenic pinnacles on the fringes of Yosemite by following one of the many trails that sets off from AutoCamp. Take a dip in the on-site freshwater pond or heated pool, or get right to it and hop the YARTS shuttle to Yosemite Valley. The historic town of Mariposa is minutes away and offers great winetasting, shopping, and brewery-hopping, too.

California-based AutoCamp also has locations on the Russian River in Guerneville, California, and in Santa Barbara, farther from national parks. Weekend and holiday bookings may require a two- or three-night minimum stay. —Airstreams from $239 per night Less than two hours from Colorado’s Mesa Verde National Park, the 500-acre Dunton River Camp features eight luxury tents with showstopping views of the San Juan Mountains or west fork of the Dolores River. Each tent sleeps two people. When you’re not off exploring the ancient pueblo cliff dwellings of Mesa Verde, steam in a streamside sauna, explore the area on a complimentary mountain bike, or visit the only active geyser in Colorado, which happens to be on-site at the Dunton River Camp. Interested in hiking, fly-fishing, or horseback-riding? Each day, an included guided tour sets off from the camp. À la carte activities such as rock climbing, rafting, and photography instruction can be booked as well. Back in your tent, unwind in the six-foot soaker tub. No need to worry about chills: A towel-warmer stands nearby. —From $1,300 per night Big Bend National Park solidified its spot as a stargazing destination when it was named an International Dark Sky Park in 2017. At Basecamp Terlingua, which is less than 10 miles from Big Bend, you can book a “bubble”–a plastic dome with transparent walls and ceiling–so you don’t even have to leave your queen-size bed for some world-class stargazing. The resort, located in an old ghost town, features plenty of other sleeping options such as adobe casitas, luxury tepees, and lotus tents–a circular tent that fuses a yurt with a bell tent. There are only two bubbles, though, and they are usually booked up four months in advance.

The bubbles sleep two people, are heated and air-conditioned, and come equipped with an indoor bathroom and an outdoor fire pit with lounge chairs. —Bubbles from $199 per night

>>Next: 11 Crowd-Free National Parks You Should Visit Instead